This week I had the pleasure of teaching a Hexastix workshop to a group of volunteer mathematics educators, at the invitation of the 2011 PIMS Education Prize winner, Veselin Jungic. As with my previous experience teaching Hexastix at Math Camp, these beautiful mathematical objects will be the take-home project for students participating in Small Number, a program for First Nations math education. 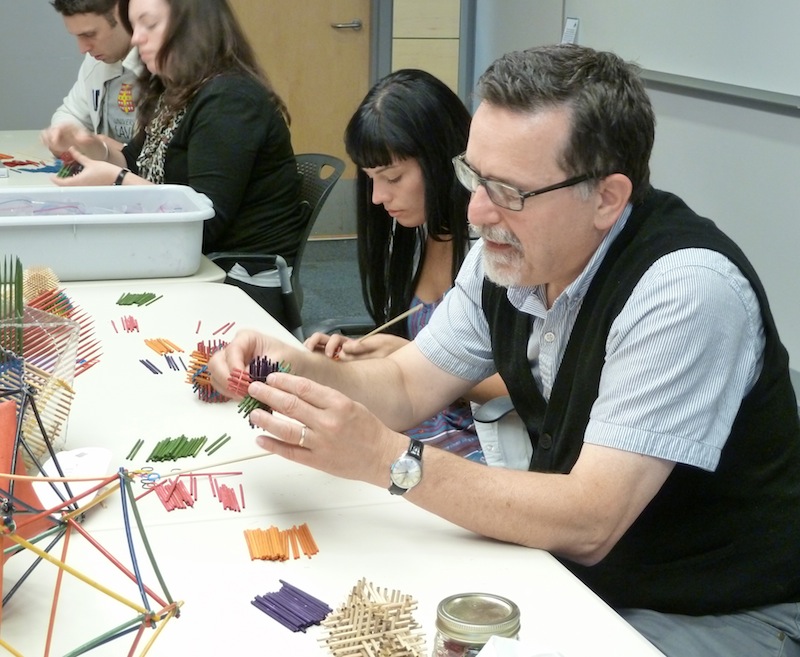 Small Number is not precisely the name of the program, but of the protagonist in the associated animation, which is narrated in Blackfoot, Cree, and English on YouTube (embedded below). If you have never heard Blackfoot or Cree, I strongly suggest you listen to those versions. The languages are moving and sounds fascinating. Here is a language map, just to give you an idea of how many First Nations languages there are in British Columbia (I’m as amazed as you are!).

The animation and the school workshop program are products of several meetings at the Banff International Research Station beginning in November 2006. There, First Nations communities have partnered with math educators to assess the performance of First Nations students in mathematics, and to find ways of providing them with more opportunities to learn it. The data presented at the workshop shows, for example, that “Over the last seven years, only 5-7 percent of Aboriginal students have written and passed the Principles of Mathematics 12 provincial exam, compared to 25-27 percent of non-Aboriginal students.”

My part is to provide the program with 15,000 coloured sticks, as well as other materials, and teach their volunteers how to make Hexastix. I used my blog post about it as a visual guide to my workshop. The volunteers were challenged, and they enjoyed themselves. Here are some pictures of our workshop.

My first real math course - real analysis, in my case - was given by Dr. Jungic in 2004. His other students and I like to recall how he explained infinitesimals by saying “small small small small”, and motioning with his hands, and then he would describe large numbers by saying “HUGE” and throwing up his hands.