My google contacts were full (because of another syncing problem with mac, multiple computers and self-duplicating contacts), and any new contacts were simply being rejected.  Either the phone is not handling this error correctly, or google is not telling the phone that it is happening.

I deleted some google contacts and the problem was fixed.

This is a very simple drink using fresh fruit and vodka.  Perfect for halloween, zombie parties, and any other situation where the highlight is morbidity.

For one drink, blend

into a slushy.  Pour into a wide mouthed glass such as a martini or margarita glass, and then drizzle dark red juice, such as cranberry juice in a line over the middle to create the appearance of a flesh wound.  See the video for a 15 second demo!

I don't know if this happens to everyone, but when I shop for a new computer, it goes more or less like this. 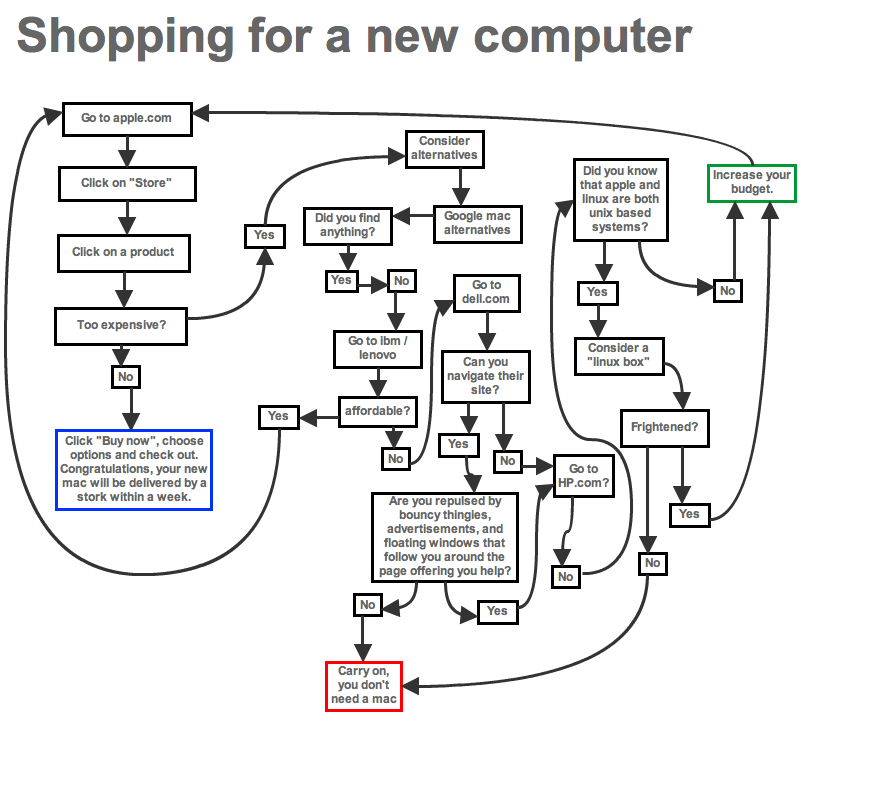 Turn around and you'll see an elephant in the room; How do content providers and producers make money?  The question has been around for as long as there have been artists and entertainers, and various solutions have supplemented our past relationships with them.  If you ask an internet savvy individual what we do now, you are likely to hear the word "advertising".

But there is a problem with the principle of ad-driven content.  The other day I was notified by Google that my little 10,000 view video has made $27 in advertising revenue.  This means that each of the 2000 or so viewers that I had while the ads were running, paid a tiny bit to see my video by looking at the advertisement, whether they liked it or not.  Worse still, those who thought it was very helpful or interesting were unable to contribute anything more.

The Internet needs a "Support" button.  The Support service can be provided by an Internet payment company like paypal.com, and content providers can put the Support button on their site, allowing viewers to donate a tiny amount of money with each click.  I can hear you preparing your counter arguments as I write this, so bear with me while I try to address them.

Don't we already have that option with paypal.com and donate buttons?  Yes, but you are interrupted by having to login to paypal.com.  No one is going to take 3 minutes to donate 10 cents.  I'm aiming for 1-click payments and one login per month.

Won't people be unwilling to participate for fear of overspending, or abuse by other users on their computers?  I have thought of two ways of solving this.  The first is that users can login to the Support service provider and nullify any payments before they go through at the end of the month.  The second is that they can give themselves a spending cap.  If the sum of their support clicks are less than the cap, then 9.5 cents per click goes to the providers (maybe 0.5 cents to paypal).  Otherwise, a lesser amount goes to each one, based on an easy calculation, dividing the spending cap by the total number of clicks.

What will people gain from this and how will the initiative spread?  By making the Support button a social sharing device, you are able to say, "I liked this enough to give a bit of cash" (incidentally, some websites might want to use an anonymous support button).  It will be driven, initially, by some people's good will, and eventually social infection.  If a friend gives 10 cents for a video, you are more likely to do so as well.  In addition to this, the Support button will only work for those logged into the service (like the facebook like button on websites).  Those who are not logged into the service will see advertisements (including for the service itself), motivating them to join.

The Support service will give users a way of opting out of the ad-driven business model.


Hexastix and their inner shapes

Recently, I was introduced to a wonderful object constructed of sticks and elastics, called the hexastix. These mind boggling structures were last seen in a book called The Symmetries of Things by John H. Conway, Heidi Burgiel and Chaim Goodman-Strauss.

Naturally, I wanted to build some of my own, so here is a brief account of those escapades.

First I made the biggest hexastix I've seen.  I keep looking hungrily at wooden doweling and bamboo though. 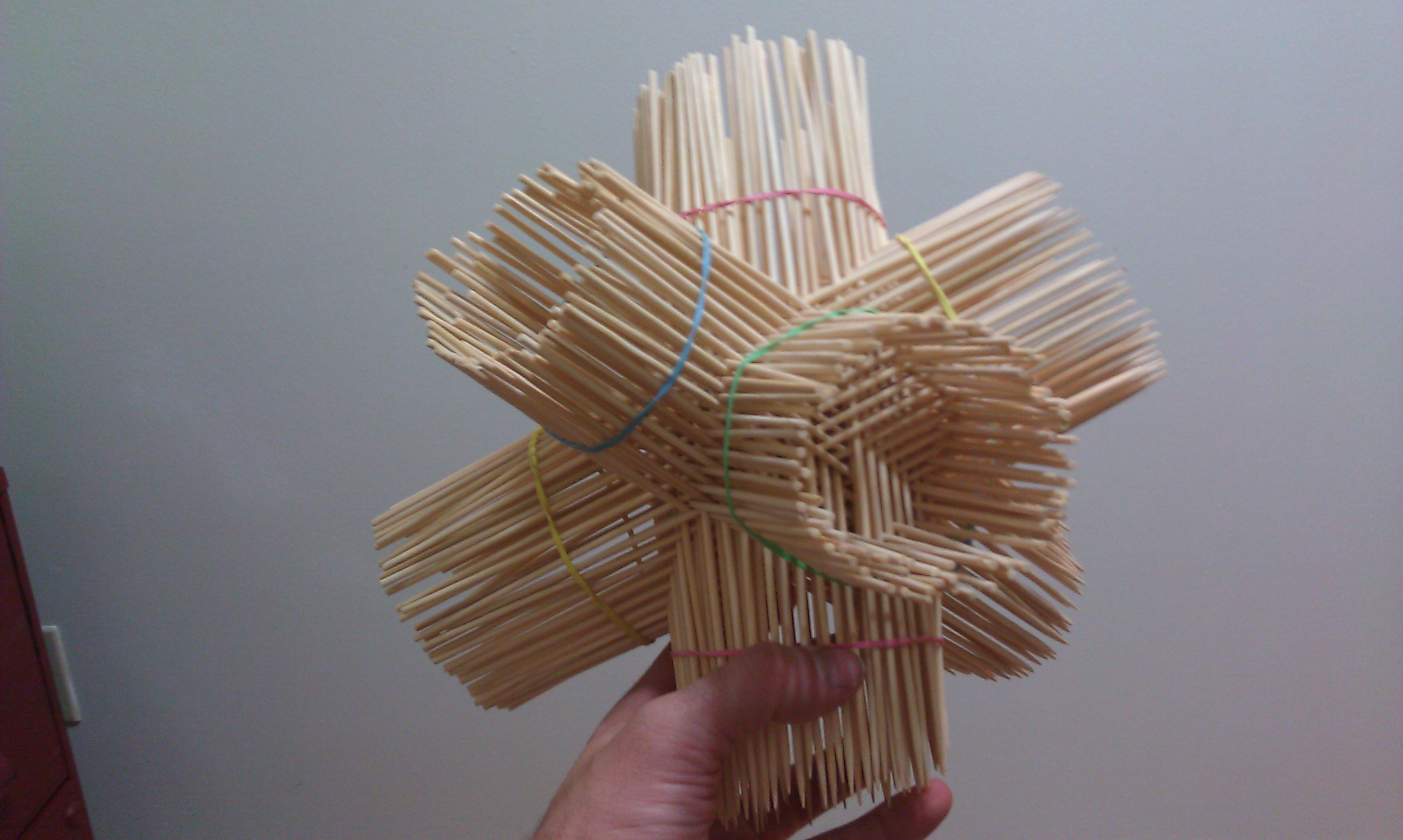 If you build your own, you'll observe that the inner cage of the above shape is approximately a rhombic dodecahedron.  More on inner cages in a moment. Hmm, better yet, why don't we just snip off the extra bits and reveal the rhombic dodecahedron inside. Realizing that a bunch of sticks (I'm calling each set of parallel sticks a bunch so that hexastix have four bunches) can be used in more than one hexastix, I started another structure - slightly wilder this time.  It still needs work (more sticks and nicer elastics, actually). 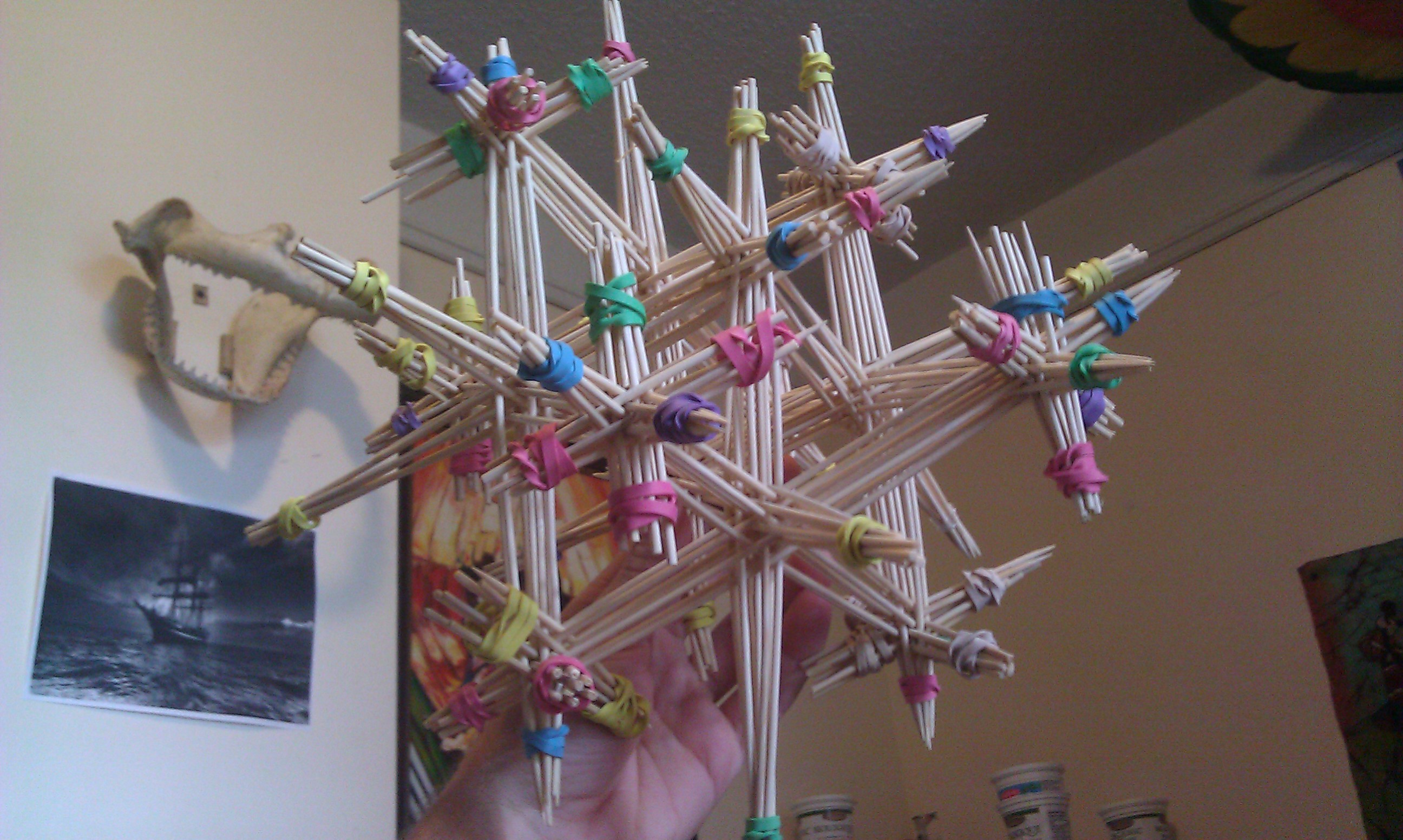 I was so excited by this time that I made a video about making them and colouring your own toothpicks (highly recommendable.  both the video and the colouring of the toothpicks).

Wanting to take the torch on the road with my I made a little educational kit so that I could show people (at the bar, no less) how to build their own hexastix.  I think I've educated about six so far.  It's a great party trick if you are a quirky guy like me. 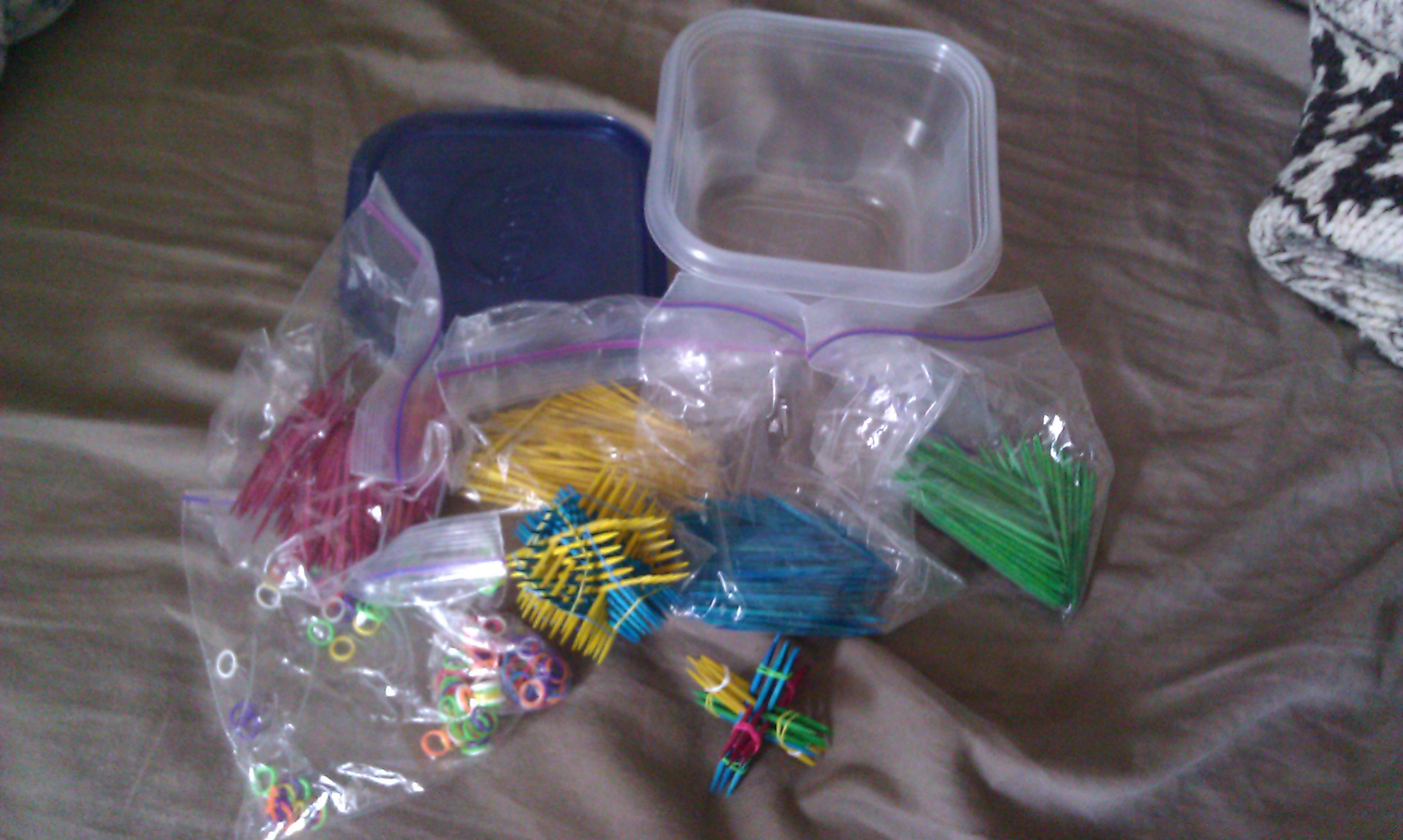 One of my more contemptuous bar pupils made rhombic bunches instead of hexagonal ones.  I was shocked at first and didn't know what to make of them.  Then I made one like that at home and discovered that it has a different cage!  It appears to be an octahedron (thanks to Luis Goddyn for noticing the error) that has had two opposite vertices squashed together somewhat, and then two other opposing vertices sliced off (in a natural way), to reveal rhombuses.  Hopefully a good drawing or computer rendition will be forthcoming from me (or you?). Stay tuned because I have one more surprise that I hope to build and show here soon :)

update 1: In the interim, I made a Fatsostix.  It's a very full hexastix. update 2:  Thousands of viewers are on the edge of their seats, waiting for the final Hexastix project as the Hexastix champion (I am championing them to you right now) brings us one step closer with ... a Hexastix in a jar!  I call it a Jarofstix.